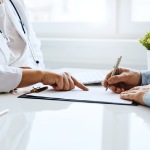 The CPA contains certain outright prohibitions on the terms that can appear in contracts, the so-called “blacklist items”. Section 5(1) of the Act provides that a supplier (doctor/hospital) must not make a transaction or agreement subject to any term or condition if it directly or indirectly purports to waive or deprive  a consumer (patient) of a right in terms of the Act or avoid a supplier’s obligation or duty in terms of the Act, that would amount to an attempt to avoid a supplier’s obligation under the Act.

In terms of Section 54(1) of the Act, a hospital is also obliged to provide quality medical services. Upholding an exclusionary clause would shield the hospital from liability in breach of its duty to render quality medical services, which would be contrary to long-standing professional standards of conduct and ethical rules which all care services swear to uphold.

Section 51(3) of the Act also provides that exemption of liability for loss or damage due to gross negligence will no longer be permitted in the South African law of contract and such prohibited terms are void and unenforceable.

The regulations governing the Act also provide a list of contract terms which are presumed not to be fair and reasonable, namely Regulation 44(1) provides that a term in a consumer agreement between a business or professional and a consumer is presumed to be unfair if it has the purpose and effect of “excluding or limiting the liability of the supplier for death or personal injury caused to the consumer through an act or omission of that supplier”.

Sections 54 and 55 of the Act provide for both quality services as well as safe and quality goods for the consumer/patient. Section 56 creates an implied warranty as the supplier (amongst others) warrants that the goods comply with the required quality standards. In addition to the consumer/patient’s common law right to claim damages for breach of contract, the Act also warrants a consumer’s right to quality service “in a manner and quality that persons are generally entitled to expect”.

Only having regards to the above provisions, it is likely that the CPA will entirely abrogate the principles laid down by the SCA in the Afrox case. This will bring South Africa in line with foreign jurisdictions regarding medical liability, specifically in respect of exclusionary clauses in hospital contracts. In short, it can safely be assumed that exclusionary clauses in hospital contracts are no longer valid.

It can therefore be argued that it is likely that any type of exclusionary clause, at least where it appears in a hospital contract, will no longer be valid in light of the CPA, especially when regard is had to comparative case law dealing with what should be regarded as an unfair, unreasonable or unjust term.

The effect that the CPA will have on exclusionary clauses and the law of contract in a wider sense will have to be determined by the courts. Except in a few limited respects, the CPA does not apply retrospectively and, as such, contracts entered into prior to 1 April 2011 cannot be attacked on their exclusionary clauses in terms of the CPA. Case law such as the Afrox case will still be a determining factor in the outcome of these matters.