To audit or to review – That is the question 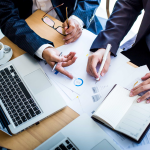 The Companies Act No 71 of 2008 (“the Act”) has made provision for significant changes for companies with regards to the requirement to be audited or reviewed.

This requirement is mainly determined by the Public Interest Score (“PI Score”) of the company which is calculated by allocating points to certain key factors and figures of the company in order to determine whether or not the company has to be audited or independently reviewed. These key aspects include the average number of employees, the annual turnover of the company, and holders of beneficial interest and third-party debt.

What are Independent Reviews

A review is a limited assurance engagement where the accounting practitioner performs certain procedures to obtain sufficient evidence to reach a conclusion regarding the financial statements as a whole, expressed in accordance with the requirements of ISRE 2400 (as revised). An Independent Review is a review engagement performed by an accounting practitioner who was not involved in the preparation of the financial statements.

In terms of Regulation 29(4) of the Act, an Independent Review of a company’s annual financial statements must be carried out:

When will a company need to appoint an auditor?

Not all companies require the appointment of an auditor, in terms of section 90 of the Act. Only public or state-owned companies are required to appoint an auditor upon its incorporation and each year after that at the company’s annual general meeting.

The regulations of the Act provide that companies which are not public or state-owned must have their financial statements audited if it is in the public interest to do so, and if the company meets the criteria prescribed in the Regulations. Regulation 28 states that any company that falls within the following categories in any particular financial year must have its annual financial statements audited by an auditor:

Any “non-public” company (in this case a private, personal liability or non-profit company) may also voluntarily elect, either by board or shareholder resolution, to have its annual financial statements audited or to include an audit requirement in the company’s memorandum of incorporation (“MOI“). In the event that the company voluntarily elects, by resolution, to have its annual financial statements audited, such company will not automatically be required to comply with the enhanced accountability requirements contained in Chapter 3 of the Act dealing with auditors, audit committees and company secretaries, unless the MOI of the company provides otherwise by specifically requiring Chapter 3 compliance.

It is important to note that if the MOI of any company requires compliance with certain or all of the provisions in Chapter 3 of the Act, then that company will be required to comply with the enhanced accountability requirements to the extent that the company’s MOI requires.